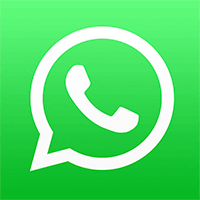 WhatsApp Messenger – Stay In Touch with Friends and Family no Matter Where You Are.

WhatsApp is a freeware, instant messaging program for smartphones. It uses a cross-platform system to provide end-to-end encrypted messages over the Internet. Users can make voice calls and one on one video calls. There is also the ability to send videos, share images and GIFs, distribute documents, show user location, plus share audio files.

Contacts can be shared between users. The application works using regular mobile phone numbers. There is a relatively new feature of WhatsApp called ‘Status’. It gives users the ability to upload photographs and videos to a live feed.

Two former Yahoo employees Brian Acton and Jan Koum began working on the app idea in 2009. Ironically, they both applied for jobs at Facebook, but neither was hired. On February 24, 2009, Koum incorporated the idea, calling it WhatsApp, because he liked the way it sounded like What’s Up. Over the next 4 years, the idea would expand, including the ability to send videos, ultimately one of the most alluring features of the app. The idea exploded, pushing the app to a top 20 ranking on Apple’s App Store.

After only four years of official operation, was estimated around 400 million active users and the company employed 50 people. Including all venture-generated capital, the business was estimated to be worth over a billion and half dollars. Adding nearly 25 million new users every month, the app caught the attention of social media giant Facebook. In February 2014, Facebook purchased the company for $19 billion, making it the largest venture-backed company purchase in history.

The app allows users to ask what’s up to anyone in their contacts in real-time. It allows for the sending of voice, message, video and imagery across a number of formats, with communications encrypted for user privacy. It is an application with such a diverse number of features and functions; it may soon be the most prevailingly used apps across the sphere of social communication.