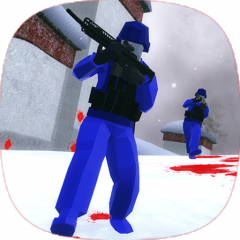 Ravenfield Beta 5 is the grandfather of one of the fastest growing cult indie game to date. Its simple design doesn’t take away from its extensive first-person, capture the flag gameplay. This single player AI Shooter game rewards the player but at the same time challenges the player and their total gaming strategy.

Developed and created by Johan Hassel of SteelRaven7. The Swedish developer believes in creating games that are easy to pick up and learn from the player. Johan also believes that the overall gameplay should be smooth and responsive to be a great game.

How stealthy can you be? Try not to be seen and maneuver between obstacles that can expose you to your enemy or keep you hidden. Created in less than 12 hours and now comes remastered.

The foundation development to Ravenfield but captures the pure multiplayer action. The game is a sandbox multiplayer shooter game that is a little buggy but continues to bring players back for challenging matches.

This cowboy simulator game is a first-person shooter game that is more than a bar brawl. You have to be quick to shoot weapons out of opponents hands or take cover from exploding bottles.

This single-player shooter game captures the frozen and isolated environment. Your skills are more than just an expert shooter you also pride yourself on your ability to skate. Combine the two skills and you could have a messy time.

One of the first games created by Johan Hassel of SteelRaven7. Many SteelRaven7 fans consider this to be a pixelated masterpiece that shows Johan’s fun artistic approach to gaming. This game contains an easter egg that has not been found by any of SteelRave7’s cult following.