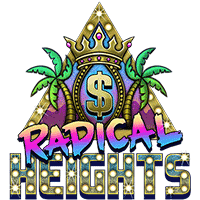 Radical Heights is one of the latest releases to join the trending Battle Royale game genre. Developed by Boss Key Productions for Windows PC, it hit the shelves on April 10th, 2018. Available as Free to Play through a Steam, Boss Key pledged to keep it that way, even after full release. Although still in Early Access (at the time of writing), Radical Heights has received a mixed reception. Since the game is still in development, it will be up to the developers to listen to its community. Boss Key anticipates the expansion to continue for about one year from the initial launch. As a result, you can expect adjustments over time, based mainly on community feedback. Since Battle Royale games are here to stay, we’re looking forward to seeing how the genre progresses.

Radical Heights is indeed a unique take on the Battle Royale concept. First impressions are Game show meets Grand Theft Auto with a twist of Fortnite. Whoops, not supposed to make that comparison to Fortnite? My bad. Regardless of similarities shared, we can agree that enough is going on here to satisfy even the harshest critic.

Set in a self-contained biodome reminiscent of SoCal, contestants enter the 80s themed Radical Heights game show. Once the obligatory character setup is complete, players drop into the arena. As you plummet to the ground, you’ll get a good look a the lay of the land. Hit the ground running, cause the race is on like donkey kong! New players start with nothing more than their bare fists, quickly locate a weapon and get the party started.

Once you get a couple kills under your belt, you’ll start making bank. And it’s that what it’s all about folks? Cash is king in Radical Heights, save it and then spend it on new digs, weapons, gadgets, and supplies. Keep your eyes open for supply chests in the form of spin to win game show components. Give the wheel a spin and collect the loot!

In true Battle Royale fashion, players must navigate the arena environment and make successful kills. As the number of players shrinks so too does the map. Since Radical Heights is laid out in a grid format, as the grid constricts, players must make their way in the safe zones. Failure to do so will result in a rapid decline of player health and inevitable death.

It wouldn’t be Battle Royale if it didn’t come down to only a few hardcore players battling it out for the top spot. Once reduced to four players, the game show announcer will declare the showdown has begun. Players must make their way to the core of the map, defined be flares.  There, you will face the remaining player in a shootout, and the last one standing wins.

In conclusion, if you’re someone who enjoys the battle royale games, then this is worth playing. If you’re someone who doesn’t like this style of play, then this will be no different. In other words, Battle Royale is not everyone’s cup of tea, and that’s fine. Radical Heights has great potential in its genre; we’re looking forward to seeing where they take it. 7.5/10