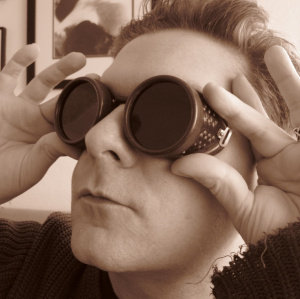 Typical of many indie developers, I started Ironic Iconic Studios in 2003 while working at an unfulfilling day job. In my case, it was coding online card games. I wanted to work on game projects that I found more compelling, games that had a story central to them. Unfortunately, I did the classic rookie mistake and decided my first project was to make a computer role-playing game: a Shadowrun-inspired sci-fi fantasy epic called My Life in Discordia. I soon figured out that it was way too much work for a one-man studio to handle. You’ve got to remember at this time there were almost no commercially available game engines for small developers: no Unity, no Unreal engine, nothing. If you wanted to make a game, you pretty much had to code your own engine from scratch. I didn’t even come close to getting it done, but I learned a lot in the process.

In the meantime, I started doing freelance writing and game design work for other game developers, mainly companies local to Victoria, BC where I was living at the time: companies like Backstage Games, Kano Apps, and Radial Games. I also started to pick up some international clients in Tap Tap Tap and Harebrained Schemes and was able to develop my reputation as a game creator. I had the good fortune to work on a variety of projects: puzzle games, tower defense games, social media based RPG-lite games, mobile art games, game world short fiction – a good mix of projects on which to cut my game dev teeth. But although I thoroughly enjoyed the experience of working with different clients and their teams, I always kept coming back to working on my own projects where I was able to have full creative control. 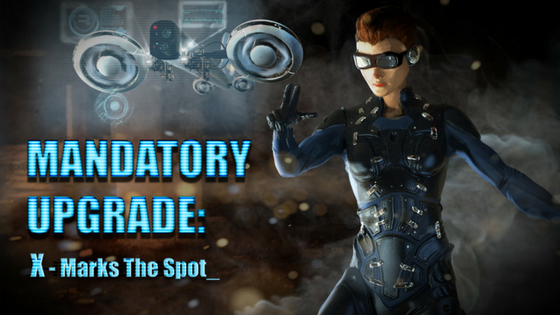 2. What would you say your favourite development project is that you have worked on so far?

My favourite project to date has to be “Mandatory Upgrade – X Marks the Spot”. It’s a story-based sci-fi mystery game set in the near-future in my hometown of Hamilton, Ontario. The main reason that it’s my favourite is that I had complete creative control over the project. As an artist, that’s important and, in the realm of game development where teams can number in the hundreds, it feels increasingly rare. I had the freedom to explore my own take on sci-fi and cyberpunk themes in a unique setting and not have anyone to answer to except for myself and my audience. I’m proud of the result and was delighted to come in top place for the Toronto Game Devs Game of the Year award for 2016.

3. How do you maintain your creativity in a fast-paced industry and prevent burnout?

When working for clients, you learn that you can’t be too precious about waiting for your creative muse to bestow inspiration upon you. You’re expected to produce, and so you must produce. The good news is that writing and game design are skills that can be learned and with practice, you can train yourself to create content regularly and consistently. It also helps that game development is largely a collaborative process. This means that often when you get stuck on something, you can bounce ideas off a co-worker and hopefully get feedback and suggestions to get you unstuck.

A way that I’ve found to avoid burnout is to be serious about maintaining a decent work/life balance. This means limiting your work to certain hours of the day and giving yourself sufficient downtime. Contrary to widely held belief, crunch is neither a necessary nor desirable part of working in the industry. You’re not doing anyone any favours by working long hours, least of all yourself. Your work quality will suffer for it, not to mention your mental well-being. Get plenty of rest and the hours that you do work will be productive and highly-charged creatively. One more piece of advice: get a hobby that has nothing to do with making games. Think of it as a mental palate refresher.

4. The Video Gaming Industry has evolved faster than I think we expected from Atari to Virtual Reality. How do you see the industry in the near future?

Having been a player of games since the heyday of Atari, I’ve witnessed a lot of these changes firsthand. With all the trends that have come and gone over the years, one thing that has gained increasing traction is the idea that video games are a great storytelling medium. We’ve progressed from telling extremely simple stories in games like Donkey Kong (plumber rescues girlfriend from rampaging ape) to stories of increasing complexity, nuance, and emotional impact. With game development tools becoming more accessible to a wider variety of people, we’re starting to get more stories being told via games from groups of people who have not had a voice in the medium before. I’m looking forward to a future that includes games that tell stories from different perspectives so that I can learn more about the other people that I share this planet with.

5.  What advice would you give to somebody who wants to follow a career in game development?

I get this one a lot. My advice is to figure out what you want out of a game development career. If you’re looking for a career at a major game studio, you’ll need to figure out what they’re looking for in a candidate and reflect that in your application as much as you can. This often means spending a fair amount of time and effort: getting an education, training, building a portfolio that shows that you have what they’re looking for. Be warned that there’s plenty of competition for these roles so you’ll need to be patient and persistent. Working as a freelancer is similar but requires you to run your own business at the same time and develop the skills needed to hunt down and secure contract work. It’s not for the faint of heart.

But perhaps you don’t want to work for a game studio and instead want to make your own games? The two main approaches to this is to start your own game company to work on your game projects full-time or get a day job and work on your projects during off-hours, mainly evenings and weekends. The first option requires learning the vital skills of how to run a business including how to get funding for your projects. The second requires learning how to manage your time so you don’t burn out (see above). I know a few game developers who opt for working on their projects as a hobby which has the benefit of cutting out a lot of the stress and worry that comes with trying to release a commercial game.

As you can see, there are plenty of options. No matter what direction you decide to go, the most important thing that you can do is to start making games now. Make mods or design levels for games that you already know and love. Most commercial games have some freely available tools for doing just that. Start looking at the many game engines that are out there that are free and easy to use and begin experimenting with them. There are lots of tutorials available online to do just that. It may seem obvious when I say it, but the best way to get a game career is by making games.

You can find me on the usual social media: Twitter & Facebook and on my website . Go here if you want to play Mandatory Upgrade: X Marks the Spot. The first part of the game is free.