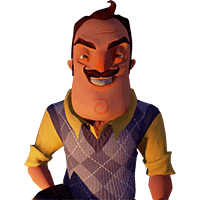 Hello Neighbor Pre Alpha was the very first playable alpha version, that was released for open testing and available as a completely free download.

This version was understandably limited in features and functionality. The primary goal here was to test and observe the AI. Player functionality as mentioned, was very limited. In this version players must collect a few items – Hammer – Crowbar – Keys – Lockpick – and a 4 digit code which is used to unlock the creepy basement.

Gameplay action is also limited. Players can use the objects they have collected to smash obstacles and knock things over. Items may be thrown in order to distract the Neighbor while sneaking around the house. Breaking a window or ringing the doorbell is also a way you may cause a distraction, but beware, the Neighbor is fast and the AI will initial chase if you are discovered. If your cover is blown, the neighbor will quickly turn to chase you, throwing bear traps and tomatoes. We’ll leave it at that, the rest is for you to find out.

Why a Pre Alpha and whats next?

The Pre Alpha really set the stage for Helo Neighbor and was a great way to observe and tune the AI for the official Alpha 1 launch.  To date, tinyBuild, partnered with Dynamic Pixels, has released Alpha 1 through 4 with a targeted date for full release Dember 8th 2017 on the Steam platform. There has been a huge amount of buzz for this game and the genre of Stealth Horror in general. Originally the Hello Neighbor was scheduled for full release in August, however that date has been pushed back to allow for more tweaks and adjustments.

What do you think of Hello Neighbor Pre Alpha? Have a question or comment? Leave a comment below.

It looks good in the pictures and videos