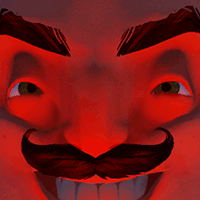 Everybody’s probably encountered a noticeably peculiar neighbor, maybe even someone rather suspicious. Hello Neighbor Alpha 4 lets you do all those things you would otherwise cringe at doing in real life. Players plot to sneak into that shady neighbor’s house and find out exactly what they’re hiding. Alpha 4 is the latest release following up the original Hello Neighbor Alphas 1 through 4, but with some sneaky twists.

Players are immediately presented with the main character that blatantly meets all the criteria for suspicious. His dubious mannerisms are enough to raise a player’s eyebrows just from one quick glance. Add to that the fact that he seems to be determined to hide something from the rest of his neighbors. The house is in basic disrepair, looking like the perfect domicile for a mysterious caper.

As soon as a player builds up enough courage to quit running around outside, peeping into his neighbor’s windows he ventures through the front door. An astute person, nervous as they are, will notice immediately that our main character’s home is short on furnishings in some rooms. The lack of household items enhances the peculiarity, plus makes each plodding footstep sound like our player is thumping along in work boots. Certainly, his neighbor has to hear him scurrying around upstairs, right?

Once players finally spot a few normal pieces of furniture, a TV, dining room table and chairs, these items start to be hurled out windows. If a player is swift enough to escape imminent peril, once his neighbor realizes he has a snoop in his house, the horrific environment of Hello Neighbor Alpha 4 will begin. Players will stumble upon a boarded-up door with a neon exit sign, but things are not always, as they seem in Hello Neighbor Alpha 4.

For players of the previous version, who found they were ultimately led to the neighbor’s basement door, they will find a flashback mode that places the whole scene in a perplexing state. Everything now appears normal, and the neighbor sits with his head buried in his hands sobbing. Players shouldn’t be fooled by the sudden switch, and the haunting sounds still play right about the time he gets ready to catch and bury his next victim.

Hello Neighbor Alpha 4 uses Pixar-style visuals to drag players through a series of intensely horrific encounters with a mysterious neighbor. Similar to Alpha 1, 2 and 3, players need to collect certain items in an attempt to open the neighbor’s basement door. In previous versions, once the neighbor was aware of an intruder, it was essentially impossible to outrun him.

The newest version actually gives the player the ability to evade pursuit, but not without some tense moments doing so. The Alpha 4 version is yet a month in release and it already has game players in search of suspense raving about the experience.

Check out more from tinyBuild and Dynamic Pixels

What do you think of Hello Neighbor Alpha 4? Have a question or comment? Leave a comment below.

THX u sooo much i can can play ir now!!!