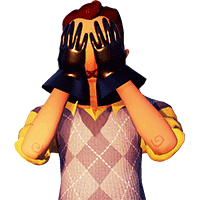 Hello Neighbor Alpha 2 brings a couple new features to the game beyond what is found in Hello Neighbor Alpha 1   plus many changes to the game environment. Most notably is the introduction of the Unreal Engine console and debugging function, that said, this would be the only Alpha download to feature these items. This version has a much more elaborate cutscene which goes on to set the tone for the game as a whole.

Again with a few design changes, the Neighbor’s house is back to the original blue as in the prototype. The house is smaller as one of the floors has been removed in this version but with the right tools, a player can access the roof. No longer is there a night and day cycle, it is always daytime in this build. Several minor edits have been made to the appearance of items throughout the game, this has improved the overall aesthetic.

Players in Alpha 2 build, have been given proper modeling and their hands are now visible when picking up an object, holding it or throwing them. The controls have been somewhat refined as well in an effort to improve the playability.

The game continues to develop in this version, with each alpha download there is more and more of a playable game, but clearly, there was more tweaking that is needed to be done before the next build was ready to be unveiled.

Check out the Hello Neighbour Wiki page at –  Gamepedia

What do you think of Hello Neighbor Alpha 2? Have a question or comment? Leave a comment below.