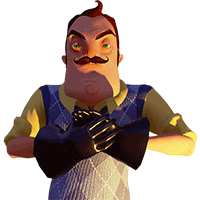 Hello Neighbor Alpha 1 is the first of the Alpha builds and was released shortly after the initial Pre Alpha build. This version would introduce some new features both in the environment,  actions, and sounds. However, Minor tweaks can also be found in gameplay with a few changes to the AI sequence of events.

In the Alpha 1 build, there are some noticeable design changes. However, the Neighbor’s house is now multi-colored and has a rollercoaster-like track wrapping around the entire building, with a tram car that is not accessible.  The house has three floors which now has an elevator that the Neighbor uses to navigate between floors. Additionally, one of the rooms on the second floor is flooded and guarded by a robotic shark. However, players must find a way to traverse the room without being caught.

Some of the sounds were changed and some items were given sound for the first time. Still, no voice was introduced to the Neighbor character in this release. The front door was given its own unique sound effect for opening and closing. There is now unique sound for the TV and Radio and is now in English which replaced the Spanish announcer’s voice in the Pre Alpha build.

A few modifications have been made with regards to the controls and actions. Although picking items up is the same, more items can be picked up. Some new items were also introduced in the build. Peaking around corners was removed from the game. The Neighbor can no longer chase the player in their own house, although the Neighbor does occasionally smash through the window and stand motionless.

Check out more from tinyBuild and Dynamic Pixels

What do you think of Hello Neighbor Alpha 1? Have a question or comment? Leave a comment below.

does it contains mod