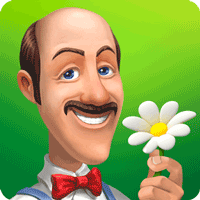 Meet Austin, your friendly in-game butler and the gain of amusing characters. Gardenscapes is a highly addictive game where you play various Match 3 levels to reveal the full storyline. Your goal is to restore the garden to its full, magnificent potential. Earn coins which you’ll then use to purchase new garden decoration and elements. Build your unique, dream garden.

There are 19 different Match 3 element, all with unique qualities and effects. The following list is a brief description of each of these elements and how they work.

Stream
-The stream appears in some levels and looks like a blue ribbon. You can see lily pads in it and pieces on them (not on the stream itself). The lily pads move in a set direction with each move.

Flowers
-Flowers can be grown on the flowerbeds available in some levels. Make matches or explode power-ups next to the beds to start growing flowers. Three matches/explosions next to a flowerbed will produce four flowers that land on random tiles.

Portals
-Portals connect different parts of the field in some levels. When pieces and other elements go through a portal, they immediately pop out the other end. Portals are often blocked by obstacles, so you should sometimes focus on those first to clear a way for the elements that go through portals.

Fireworks
-Fireworks appear on some levels and look like round boxes with a picture of a firecracker on them. Match fireworks with pieces of the same color or explode power-ups nearby to activate them. Since Lightning remove pieces of a particular color, they also activate fireworks of that color. Once activated, each box launches three firecrackers that destroy three random pieces on the field, usually with a focus on level goals.

Additional Moves
-Additional moves appear as yellow pieces with a number on them in some levels. You need to make a match or explode a power-up next to them to get the moves added to your count. The number on each piece tells you how many extra moves you get.

Additional Seconds
-Additional seconds appear on timed levels as yellow pieces with a number on them. You need to make a match or explode a power-up next to them to get the extra time. The numbers on the pieces tell you how many seconds they give you.

Color Boxes
-Color boxes appear in some levels. You can collect them by making matches of the same color or by exploding power-ups next to them.

Stone
-Stone appears in some levels. Start by cracking it with an explosion and then completely remove it with a match or another explosion next to it.

Fireflies
-Fireflies can be found locked in jars in some levels. You need to make matches or explode power-ups next to the jars to collect them. Every match or explosion opens the jar to let one firefly out, and jars disappear once all fireflies are out and collected.

Honey
-Honey appears in some levels. You need to make matches or explode power-ups next to it to collect it. Just be careful, because honey is tricky: it’ll leak further and block one tile after another with each move you make that does not collect any of it.

Honeycomb
-Honeycombs produce honey on the field in some levels. You can’t get rid of them, but you can collect honey not letting it leak further as you usually do — by making matches or exploding power-ups next to it.

Moles
-Moles appear in some levels and can cause a lot of trouble. If you make a match next to them, they move to a random tile on the field to steal pieces and other elements you need to collect to beat the level.
You can stun moles by exploding power-ups next to them or by using a shovel, which stops them from stealing for the next two moves no matter what you do. Also, bear in mind that moles stay calm and don’t steal anything if you don’t make matches next to them.

Mushrooms
-Mushrooms appear on some levels to block access to part of the field. Make matches or explode power-ups next to them to break them. They’ll disappear from the field once all of them are broken.

Boom Box
-Boom boxes appear on some levels looking like sectored packages with a picture of a bomb in the middle. To activate them, make matches next to each sector using matching pieces. Once activated, Boom Boxes produce a massive explosion that clears all pieces from the field (and destroys one obstacle layer).

Picnic Blanket
-Picnic blankets appear on some levels to block part of the field. There’s a basket resting on them that you have to fill with a certain number of pieces. The Picnic Blanket disappears once the basket is full.

Lawnmower
-Lawnmowers appear on some levels. Every time you match pieces of the right color, they charge the Lawnmowers a little more. Once those are fully charged, they start moving in the set direction until they reach the end of the row, removing all the pieces in their path and damaging obstacles as they go.

Statues
-Statues can be made out of the unusual stones available on some levels. It takes three power-up explosions next to one of them to make a statue.

Mystery Sacks
-Mystery sacks appear on some levels, looking like colorful sacks with a question mark on them. If you make a match with or detonate a power-up next to one, a random booster or obstacle appears in its place.

The Frequency of Gardenscapes Updates

Rest assured, the developers and Playrix are always working to bring you fresh content and new updates. In general, the updates seem to come out on a monthly basis, although this is not always the case. Stay tuned for the latest Gardenscapes update!