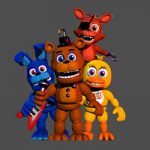 FNaF World is a spin-off from the original Five Nights at Freddy’s game, an indie point and click survival horror game. Launched at the beginning of 2016, the game saw much criticism as there were may flaws and the game was fairly unfinished. At that point the game was removed from the digital storefronts until it was updated and relaunch later in 2016 on GameJolt.

FNaF World is broken down into two-player modes: Adventure and Fixed Party. Explore the world of animatronics, teleporting between locations on the world map trying to fix the “problem” affecting the world. Meet new characters along your journey which will add to the storyline. Beware of enemies as you explore, you will have defended your self and win the battles to continue on.

You can find the entire cast from the original Five Nights at Freddy’s featured in FNaF World.

Although Five Nights at Freddy’s has had mixed reviews, the game continues to grow in popularity with each update. FNaF World is a Free Game so let’s be honest, you have nothing to lose by trying it out.