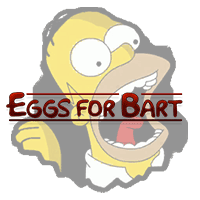 Get Eggs for Bart

Get Eggs for Bart

While intended as a parody, Eggs for Bart fits directly into the stealth horror genre of video games. Developed by Fleebs, an indie game developer, Eggs for Bart features your favorite cartoon family The Simpsons. There are currently two parts to the story, Chapter One and Chapter Two. Firstly, the player starts the game playing as Bart’s dad Homer. Homer’s mission is to locate and collect a total of two dozen eggs for Bart. While this sounds easy, it is far from it. With a limited carry capacity, Hommer can only pack six eggs with him at one time. Since the mission requires more than one trip, you can expect things to become increasingly difficult each time. Equipt with only a flashlight, Homer must sneak out of the house in the dead of night to retrieve the Eggs for Bart. With that said, you are not alone.

The Hutner Becomes the Hunted in Eggs for Bart

As mentioned, you are not alone. While you hunt around the dark, collecting the twenty-four eggs, something or someone is stalking you. In fact, the thing that is tracking you is none other than an evil Marge. She will stop at nothing to find those eggs. For this reason, you must be quick and quiet so as not to alert Marge to your location. With any luck, you will find the Eggs for Bart and complete Chapter one.

By the time you finish the first chapter, you’ll realize that there is more to the game then first thought. Until now, you have played as Homer collecting eggs for Bart, but now Homer is missing. In fact, the whole family has gone missing. At this point in the game, you take on the role of Ned Flanders. Since the family has gone missing, Ned’s concern grew more and more dier. In chapter two, your mission is to attempt to locate the family while going undetected. After all, the night is dark, and you are not safe out there alone with only a flashlight. In truth, this will not likely end the way you’d hope. But good luck! All the best and whatever you do, stay safe.

Of course, it is essential to know the controls available to you in Eggs for Bart. There are only a few to remember so it should be easy. Players use their mouse or trackpad to look around. To move forward, backward sided to side, use the WASD keys. Also, you may turn the flashlight on and off using a left click action on your mouse.  Most important is the sneak and crouch function. To sneak, press the left shift key, and to crouch, press the left control key. Also, the E key is used to search your immediate surroundings.

What do you think of Eggs for Bart? Have a question or comment? Leave a comment below.