Demon Emperor Void Dark along with his army the LOST have quickly destroyed countless Netherworlds. Now, that most of the galaxy has surrendered the dark Emperor is convinced he will rule them all. However, Killia, a young unknown demon is alone in the fight to bring the Emperor down to his knees. Finally, together with Princess Overlord Seraphina
they will stop evil from taking over the universe.

Disgaea 5 Complete is reimagined and rereleased with powerful new features and storyline. Not to mention, the game is hand detailed with animation effects that make gaming magic. Takehito Harada continues as the lead illustrator for the series and is able to capture the purest essence of the story.

The Disgaea series is probably the wackiest SRPG series in existence. The games feature the most colourful personalities combined with the most unique and wackiest battle system for an SRPG. Think Fire Emblem or Final Fantasy Tactics, but with a comedic anime cast. In terms of battle systems, you can do things like turning your monster-type characters into weapons, or creating a humanoid/monster tower with your whole team, dealing millions of damage with one attack, and most importantly throwing explosive penguins at your enemies.  ~Toshi Beppu Via Miketendo

Players can create and customize their own world with over forty different jobs and alien races. Also, the game offers hundreds of different items or simply make your own items with your Alchemy skills. As your personalized anime character evolves so will their skills and abilities.

The game is about strategy and complex problem-solving. Furthermore, every tactical battle is rewarded with incentives that offer bigger effects and explosive powers.

Players will receive the full Disgaea 5 story with an added 8bonus situations. Now, bigger than ever the developers also included four fan favorite anime characters and three classes from the Disgaea series.

The characters listed below are the main characters involved in the story of the game. However, There are more characters that you will uncover as time goes on. Other characters include a Pirate, Dark Knight, Sage, Magician and so much more.

Princess Seraphina: Once inline to mary the evil emperor Void Dark she ran away to find freedom.

Usalia: This curry eating successor to Toto Bunny must be kept well fed or she could explode.

Scorching Flame: This demon overlord wants to be the most powerful in the galaxy and wants to take the Emperor down.

Christo: One of the most intelligent Overlords in the galaxy. He will use his smarts to take over the universe.

Zeroken: One of the smallest Overlords that can take on the personality and thoughts of people he meets.

Void Dark: Leader to the Lost army who is ruthless and destructive with anything in his path.

Majorita: Loyal to Void she has special powers that that can bring the dead to life.

Bloodis: The Demon General who leads the Lost army and right-hand man to Emperor Void.

Liezerota: She brings calm to the galaxy and is attracted to Killia. 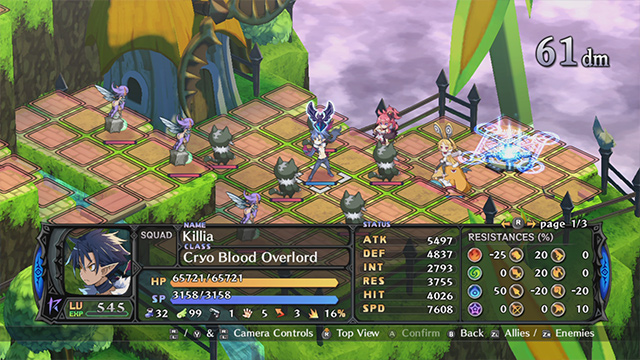 There are so many new additions to the Digaea world. In fact, they are all centered around vengeance and anger.

This feature is a small gauge that charges during battle. Once topped up your character will explode with rage and vengeance.

Every Overlord has a class power called Overload. When your Revenge mode bar is full Overlords can release their class power.

Players can team up and unleash combined powers to take down their enemy. Each time players combine powers they generate a special cutscene especially made for the two individuals.

Organize squads that will unlock new features and benefits. Not to mention the Squad System benefits tactical training and increases battle options.

This highly anticipated, award-winning game is now available for everyone from Nintendo, PlayStation and now PC. Not to mention, everything that fans have come to enjoy about the original series comes back just better than ever. Finally don’t get left behind to enjoy Disgaea 5 Complete, get your copy today.