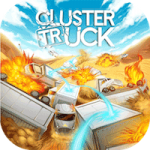 Firstly, the name says it all. To explain, “Clustertruck” is a situation of such a chaotic nature that everything goes wrong. That is to say; after a few rounds, players quickly understand how the developers humorously coined the name. Players try to sprint at top speed, leaping on the top of moving trucks, while trying not to fall off. As a result, and as the game progresses to higher levels, the challenges grow harder. The game can be described as a fast-paced and challenging physics-based 3D platformer with a whole lot of chaos.

Developed by the Swedish game developers at Landfall, the game is a result of real-life traffic jams. Initial development began in September 2015, with a trailer released in December, followed by a proposed release in April 2016. In fact, just after the release, LandFall announced a publishing partnership with tinyBuild Games.

The deal created a delay in the official release until the fall. However, as an April Fool’s Day joke, LandFall leaked out a free demo version called Supertruck. Also, preview copies, distributed to YouTube and Twitch.tv, saw the game officially hitting the market on September 27, 2016.

The game begins with a simple leap onto the first moving truck. Players ride along atop the trucks during the lower levels, trying to maintain balance. Their objective is to avoid falling off onto the grass and ice. As the level increases, it becomes more difficult to jump on the moving truck. Also, players must now navigate their way from one vehicle to another.

In conclusion, Clustertruck is a unique concept in fast-paced games. It’s a thrill to sprint as fast as a person can, and leap onto the top of a racing truck. As the game progresses, the vehicles get bigger, and they get faster. That means with every level a player successfully navigates, and the challenges get harder.